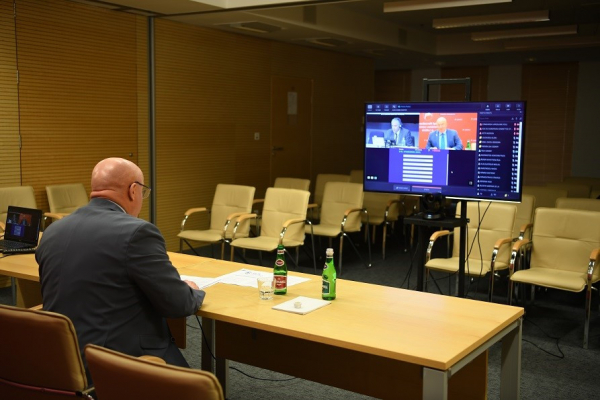 The Marshal of Lubelskie Region spoke in a debate on Ukraine held on the first day of the CoR plenary session of 27-28 April, with the participation of Janez Lenarčič, European Commissioner for Crisis Management. As a member of the CoR's European Conservatives and Reformists Group, Marshal Jarosław Stawiarski stressed that we are seeing values such as solidarity and fraternity in action now more than ever.

This is due to Russia's brutal and unjustifiable aggression against Ukraine. Mr Stawiarski began his speech by quoting St. John Paul II: "A person is only worth what they can give to another". We are aware that war affects the most vulnerable people most acutely – women, children, the sick, disabled and the elderly. Since the beginning of the Russian invasion of Ukraine, Poland has already taken in more than 2.8 million refugees. The Lubelskie region, represented in the CoR by Marshal Stawiarski, directly borders Ukraine. Its regional government organises humanitarian aid for refugees and for those who have stayed in the war-torn country.

Lubelskie's partner regions in Ukraine are facing unprecedented levels of internal migration. Volhynia, Lviv, Rivne and Ternopil are places that can still provide safe harbour for those fleeing eastern Ukraine. This is where the Lubelskie regional government is directing its assistance. Lubelskie has already sent nine aid shipments to the Rivne, Volhynia and Lviv regions. Each of these regions transfers the aid it received to the places on the front-line where it is needed most. The region's hospitals sent eight ambulances, which are already providing assistance in Ukraine. The regional assembly granted PLN 900 000 to four municipalities bordering Ukraine which have been assisting refugees from the outset.

Mr Stawiarski called for Poland to receive similar financial support as Turkey to help refugees. He argued that we needed to be aware of the need for further efforts to help Ukrainian citizens – both those who are in Poland and those who are resisting the enemy's attacks every day. These people are not only fighting for their own freedom, but ours as well.