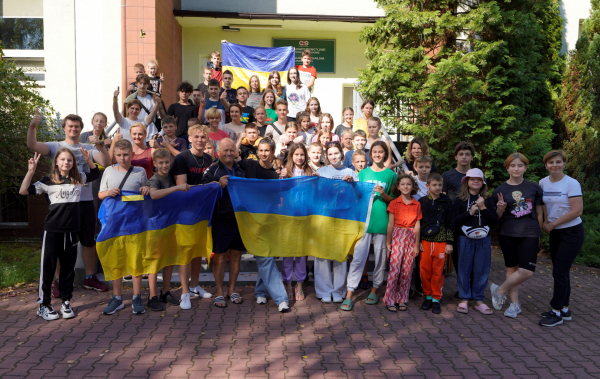 Children who arrived in the Polish region of Łódzkie from partner regions in Ukraine have ended a two-week sports camp at the Central Sports Centre in Spała. The summer camp in Dobieszków has also came to an end, where Ukrainian children who had been living in Poland for several months had come to take a break.

Veronika (aged 11) arrived from Odessa, Sofia (aged 10) from Donetsk. They became good friends. "We lived in a single room, we went to discos and watched films together, we are best friends," said Sofia, who has been in Poland since the outbreak of the war. Her mother was due to join her. Her father and grandfather are fighting in Ukraine.

"I really enjoyed the summer camp, we learned Polish, we played sports and music and we managed to have a rest. I don't want to leave and I thank the Polish people for this opportunity," adds Valeria (aged 13) who had come from Mykolaiv.

At the end of their stay, the children received filled school backpacks from Marshal Grzegorz Schreiber, member of the ECR Group at the European Committee of the Regions.

For both groups, the organiser of the holiday was the government of Łódzkie regional government.

The European Committee of the Regions, in consultation with the Association of Ukrainian Cities, encourages local and regional authorities from across the European Union to organise similar events.