Anna Magyar: Serbia is welcome in the EU, the role of local authorities is important

Anna Magyar: Serbia is welcome in the EU, the role of local authorities is important 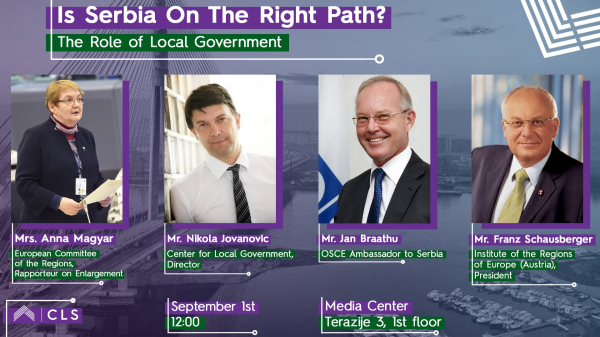 At 1st of September panel of the Centre for Local Self-Government (CLS) entitled ‘Is Serbia on the right track?’, CoR rapporteur Anna Magyar and other participants agreed that Serbia should become a full member of the EU, but the fight against corruption must be intensified, the work of local authorities improved and participation of citizens in passing and implementing of local decisions increased.

Anna Magyar, an enlargement rapporteur for the European Committee of the Regions, presented the Committee’s report on Serbia and stressed that the European Union should only demand from Serbia what was valid for other countries.

“Being Hungarian, living very close to the Hungarian-Serbian border, only 10 kilometres away from it, it was very important for me to become the CoR rapporteur on enlargement. This is the second time I gained this rapporteurship, five years after the previous one. It is interesting to see many positive changes that happened during these five years, but on the other hand it is sad to see the slow overall progress with EU enlargement”, said Ms Magyar.

The rapporteur also congratulated Serbia and its government on the successful constitutional reform, which shows a clear commitment of the country to join the EU:

“These latest achievements are very important steps that will revitalise the accession process. But more than that: these are the most important developments in the enlargement dossier in many years and also a sign for the entire region that the accession process works if there is real political commitment. As a person strongly in favour of enlargement, I would like to thank the Serbian government for this”.