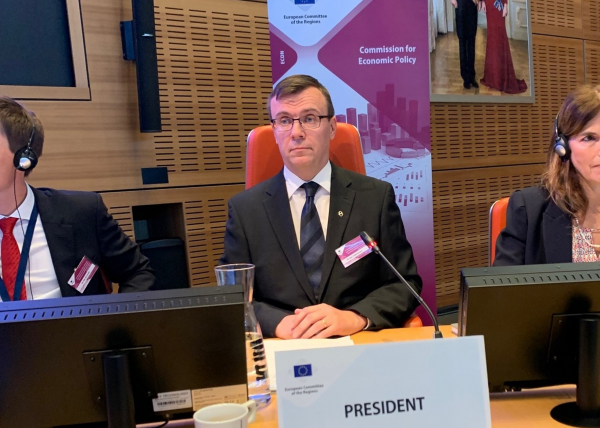 Our Finnish member Ilpo Heltimoinen has been elected First Vice-Chair of the European Committee of the Regions' Commission for ​​​​Economic Policy (ECON) at the Commission´s external meeting on 22 September in Zwolle, the Netherlands. Mr. Heltimoinen, Lappeenranta City Councilor, will hold this position for the second half of the mandate, a total of 2.5 years.

​​​​The ECON Commission coordinates members' input on issues related to economic and industrial policy, such as competition and state aid policy, public procurement, SME policy and entrepreneurship, economic governance and the European Semester to name but a few. ECON also manages relations with the European Investment Bank and the Broadband Platform, which is a joint initiative between the European Committee of the Regions and the European Commission to help high-speed broadband reach all European regions.

Mr Heltimoinen, who looks forward to the challenges the role will bring and upon his election, stated: "I am pleased to be elected to this important position and to chair the first meeting of the ECON Commission in the second part of the mandate of the Committee of the Regions. Since the outbreak of the pandemic and the Russian attack on Ukraine, Europe has been confronted with unprecedented challenges, all of which have their serious economic repercussions. This makes the role of the ECON Commission even more crucial. I thank all the CoR Members for entrusting with me this new role and look forward to jointly searching for policy solution which will protect our citizens and businesses."