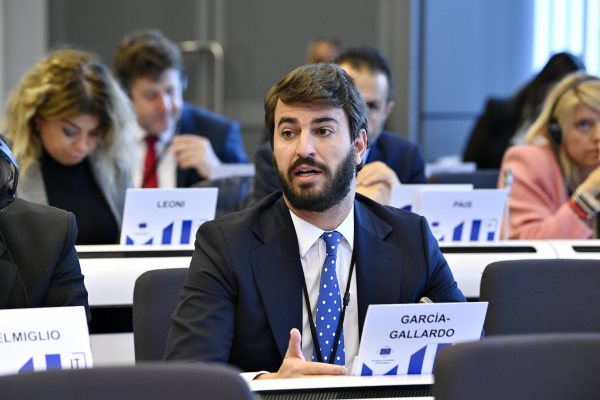 The Vice-President of the Regional Government of Castile and Leon in Spain, Juan García-Gallardo, spoke in the debate on the Future of Europe held on 12 October at the European Committee of the Regions. A debate in which the ECR Member stressed that "there is no future without birth rates, strong families, safe borders".

During the debate with the members of the European Committee of the Regions, García-Gallardo said that the proposals regarding energy, transport and the fight against depopulation heard over these two days "omitted what was essential". "While you go on about your climate catastrophism, you silence the real threats to the future of Europe," he said.

"Europeans would not risk their lives because of CO2 emissions, cycle lanes or the Agenda 2030. However, they will do so for love of their family, of the land that their parents worked or of the cultural legacy of their grandparents," he said.

García-Gallardo has insisted that Europe needs "less climate fanaticism and more defence of our interests and way of life". "We need less relativism and more policies that support birth rates and families. We need less Agenda 2030 and more common sense," he commented.

The Vice-President of the Regional Government of Castile-Leon concluded his speech arguing in favour of a Europe of patriots and offering his congratulations on the Day of Hispanicity.

The Vice-President for Democracy and Demography of the European Commission, Dubravka Šuica, presented, among other things, the expected follow-up on the Conference on the Future of Europe.