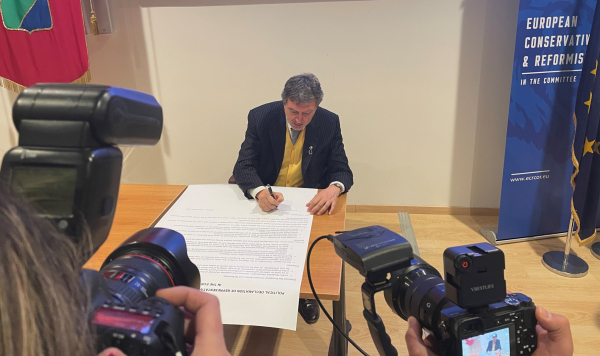 The ECR Group in the European Committee of the Regions today held its fourth annual Localism Summit in the Abruzzo region in Italy during which conservative and reformist local and regional leaders confirmed their willingness to strengthen bilateral relations in the form of a political declaration.

In the declaration, ECR politicians from the Czech Republic, Finland, Hungary, Italy, Poland, Slovakia and Spain declared their commitment to circulate administrative measures drawn up by individual local and regional authorities; develop bilateral agreements between regions and cities on specific topics of mutual interest; as well as to assist each other in crisis situations such as natural disasters, health emergencies or increased migratory pressure.

ECR CoR President and President of the Abruzzo Region Marco Marsilio emphasized the importance of "strengthening cooperation between conservative local and regional politicians of Europe" in these difficult times marked by uncertainty. With increasingly inadequate resources, "local communities cannot be left alone to face challenges such as natural disasters or depopulation of inland areas and must cooperate more closely to face them", pleaded the host.

Disasters and demographics featured as the two main topics of the Summit. Tragically, in 2009, the city of L'Aquila was the epicentre of one of the most devastating earthquakes in Italy's modern history. The trials, successes, and failures Abruzzo faced in anticipating, surviving, and recovering from this disaster contain many invaluable lessons for local and regional authorities all over Europe.

Keynote speaker Raffaele Fitto, Italy’s Minister for European Affairs, said: “The issues addressed today certainly represent some of the main challenges that local communities will have to face in the coming years. I believe that President Marsilio's choice to hold the Summit in L'Aquila represents a sign of hope and rebirth."

On demographic decline and depopulation of inland areas, speakers voiced concerns about the lack of family friendly policies with the result that many young people do not feel economically and socially secure to establish families and remain in areas where they were born. Another factor exposed by many of the speakers as a contributor to demographic decline of many regions is cultural.

Fabio Rampelli MP, Deputy Chair of the Italian Chamber of Deputies stated: "The depopulation of inland areas, that we have been witnessing for decades, contributes to the loss of an enormous social heritage with devastating repercussions. Tackling these issues is of strategic importance - the revitalization of inland areas must be top of the political agenda".