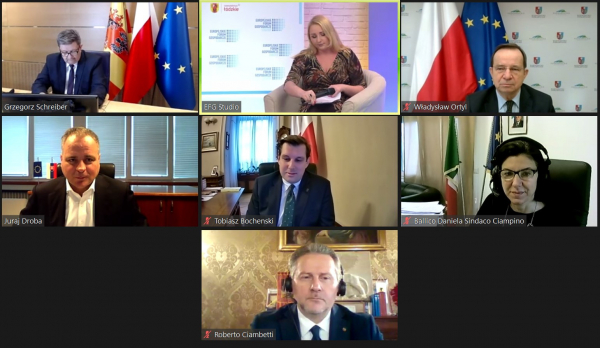 Marshal Grzegorz Schreiber, President of the Łódzkie region, who was hosting the inaugural session of the European Economic Forum, opened the floor by describing the situation in his region, offering an insight into the many initiatives and projects developed by local authorities in fighting COVID-19. "Every area of life has been impacted, it has been a very difficult time in Poland and in Europe, with no region being spared. "Local governments must be recognised for all the hard work they have done", said Marshal Schreiber.

One of Łódzkie region's biggest projects was locally producing masks and the purchasing of personal protective equipment (PPE). Care homes in the area were also assisted as well as staff and many masks were distributed free of charge – this was done in cooperation with the army and the police. Hospitals were equipped with ventilators, respirators, and computers. In terms of economic measures, financial assistance was offered to NGOs in the form of micro-grants totalling EUR 80,000.

ECR Member Marshal Schreiber also mentioned the various social measures that were put in place such as the setting up of a helpline for young people in isolation via social media apps, including messenger. This proved to be a very successful initiative and even prevented three suicide attempts. He concluded to say that "we must listen to people's voices; solutions need to be adapted to regional needs".

The Mayor of Ciampino, ECR Member Daniela Ballico, described the "heart-breaking image of an empty Rome, a city reliant on tourism" but also shared her hopes and optimism for the recovery of the economy. For her, the pandemic should be fought with medical measures and we need to do our "utmost to avoid a total lockdown". Italy was one of the first countries to be hit and the closing down of shops and businesses has had serious consequences on the economy. Many jobs were lost because companies just didn't have the resources to face the pandemic.

Ms Ballico expressed her disappointment at the lack of "solidarity in Europe and the world at the outbreak of the virus". On a more positive note, the situation in her region is now under control and beds have been secured in hospitals.

Mr Juraj Droba, ECR Vice-President and President of the Bratislava region, also spoke on how Slovakia saw the early warning signs in Italy which inspired the convening of many committees and meetings, but people were "too scared to act, too scared to make any decisions". Mr Droba took the decision to close schools in his region on 8 March and a few days later the national government followed suit and closed down schools across the country.

The first wave was dealt with very successfully in Slovakia despite the economic consequences and the death toll was comparatively very low. However, Mr Droba explained that the summer holidays saw an increase in the number of people travelling and an ease in restrictions, and the "situation got much worse and the estimates for the December death toll are 1000". He feels the central government is not doing enough and does not agree with the nation-wide testing scheme. Measures should be "local" including lockdowns and the "whole country should not be shut down blindly". He believes that there will be more fatalities due to mental health and that the focus should be getting the economy back on track.

ECR President Władysław Ortyl said that policies and strategies needed to change to include COVID issues. He continued by saying that the pandemic even "launched some safeguarding measures, local authorities are now more interested in innovation, R&D teams are developing new products". He focused on the importance of solidarity and cooperation and said we should not be importing masks from abroad but to produce them domestically.

ECR Member, Mr Roberto Ciambetti, who is also President of the Regional Council of Veneto in Italy, believes that despite the 4% decrease in the Italian budget, "new technologies will help accelerate the rebound of the new economy". Mr Ciambetti also said that the pandemic has given his region an opportunity to look forward and to analyse "whether people have access to basic healthcare services". It is a time for solidarity and "Europe will have to get together, there is no room for wasting public money". For him, it is very important that local realities are kept in mind. "Effective healthcare must be implemented depending on what is available in each region".

On the subject of lockdown measures, ECR panellists shared the view that total lockdowns should be avoided where possible and that the main focus at this time is getting the economy to bounce back. The subject of a COVID-19 vaccine was also discussed with many of the ECR members stating that vaccines should not pose a health threat and that the elderly and vulnerable must be given priority. President Ortyl summarised by saying "everyone, including the economy, our societies – we are all waiting for the vaccine".

They all agreed that life after COVID will be different, but in good ways too. We will pay more attention to hygiene, respect different ways of working and interacting. ECR Members feel that people have the drive and energy to get back to a normal way of living as soon as possible.

The European Economic Forum has been organised periodically for several years by the Łódzkie region in Poland and has become a fixture in the calendar of the most prominent business events in the country.

The Forum provides a platform for entrepreneurs – including small- and medium-sized companies – to share their experiences. The event covers various business topics including entrepreneurship, logistics, transport, new technologies, research, and innovation among other topics.

The inauguration session of the Forum this year was hosted by the Marshal of Łódzkie region in Poland, ECR Member Grzegorz Schreiber, and organised in partnership with the ECR Group in the CoR. It took place on 2 December in a virtual format.